and now also available as EBook:

(and of course in most stores worldwide) 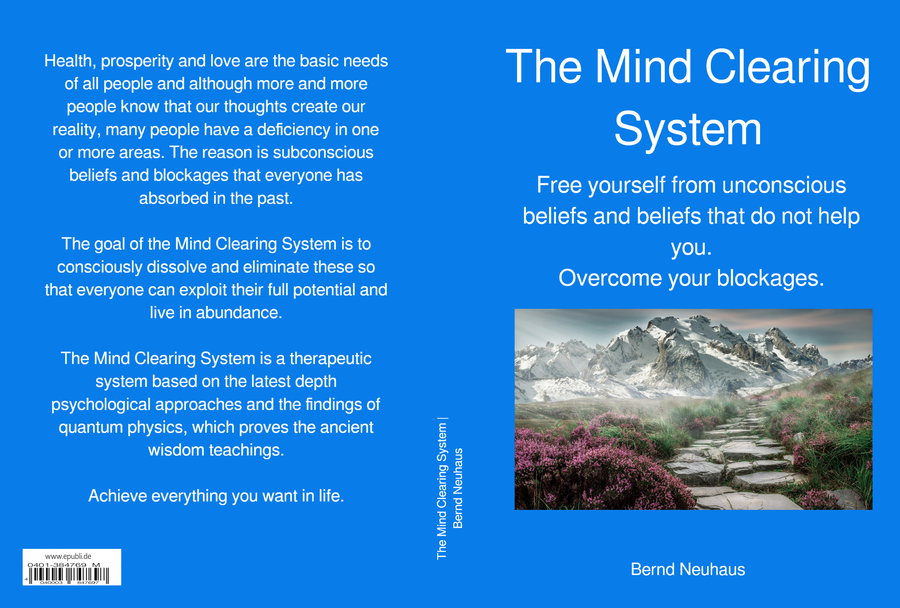 The Mind Clearing System is not an esoteric brainwashing, but a therapeutic system based on the latest deep psychological approaches and the work of
Dr. Dietrich Klinghardt and Gary Graig, as well as the well-known psychiatrists John Diamond, John Goodheardt and especially Roger Callahan. Furthermore,
the approaches of Dr. Rüdiger Dahlke and Ph.D. Bruce Lipton as well as many quantum physicists have inspired me to put the theory into practice.

As I have already explained in my book "You have the power", and as it is also written in many old texts, we create our lives through our thinking.

This is not only said by the old wisdom teachings, among other things Jesus also spoke about it, meanwhile modern quantum physics proves that everything
we experience as reality depends on the observer (from. us) and is influenced by this (by us).

What is too often forgotten is the fact that the vast majority of our thinking is unconscious.

That is why many people who actually claim to think positively are then affected by adverse living conditions or illnesses. What is the reason for this?
It is solely due to unconscious beliefs that we have taken up since conception and which are contrary to the desired result.

Of course, almost everyone will say very quickly how this is supposed to happen, especially since the procreation. It is clear that our brains only develop much later.

Here we cannot fail to use the concept of the soul. This enters into what later forms the human body with procreation.

How do I come to this assumption? Epigenetics shows it, my experience with psychokinesiology and hypnosis show this.
Thus, it is possible to return a person to prenatal times using hypnosis. This even goes so far that people can even remember your own procreation.

Based on this knowledge and with the consideration of child psychology, it is relatively easy to know how beliefs arise in man.

As can be demonstrated by brain waves, children are constantly in a receptive mode, ready to record all the information from the reference persons and the environment they
need to be able to cope with their lives later on.

Children, as we all know, see the world with their eyes, which means, first and foremost, that they see themselves as the center of the world in a normal and natural way.
Children relate everything to themselves, and also feel responsible for everything.

For example, a dispute between the parents of children is interpreted as being responsible for this, or at least the cause of it. Furthermore, children do not understand irony, and how often did adults use a phrase that is actually meant ironically.

If parents are not well aware that children are looking at the world in this way, beliefs are very often born that no longer help the later adult.

Almost no one has been lucky enough to have such well-known parents, and so we all have hundreds of beliefs in us that hinder us and even make us sick.

Armed with my experience of working with EFT, psychokinesiology and hypnosis and inspired by the personal peace process (according to Gary Graig),
I have developed mind clearing, which serves to systematically discover and neutralize the non-serving or even disturbing beliefs.

Of course, beliefs can also arise at a later stage in life, advertising and politics make a lot of use of this possibility through targeted manipulation.
However, the older and more conscious a person becomes, the lower the risk. With the onset of puberty, we develop our minds that can decide what we perceive to be true
or can do as untrue.

The solution is simply to systematically look at one's own life and to question the beliefs in which one acts.

Through targeted application of mind clearing, we achieve absolute mental clarity and thus lead a conscious and happy life.

But beware, a targeted application of mind clearing will change your life and your life. You will become bolder, healthier, more confident, more successful and fuller of energy.

I would point out that mind clearing is also the work to seriously improve health. Many people have already cured serious diseases with it.
And since healing is allowed in this country to a fairly narrow group of people, I would like to point out explicitly that the disappearance of diseases is only an unintended side effect of it,
which has freed the soul. Nevertheless, the legal indication that no one should be prevented from going to the doctor must not be missing. Likewise, I will not recommend anyone to stop medications that have already been prescribed or to stop arranged therapies. Those who do so act on their own responsibility.

At this point also my huge thanks to my wife Sigrid, who was and continues to be instrumental in the further development of mind clearing. Especially because of their great sensitivity,
we were able to identify many problems much earlier and thus provide effective help. She has not only endured my mental absence when I have once again spent many hours in front of the computer, she also contributed many suggestions and parts of the text. The chapters on hermetic are largely from their pen, and the collection of beliefs that often appear is also due to their efforts. And, of course, thanks to the many people who are already working with it and who show us through their successes that this is the right way to go.

Just thank you all.